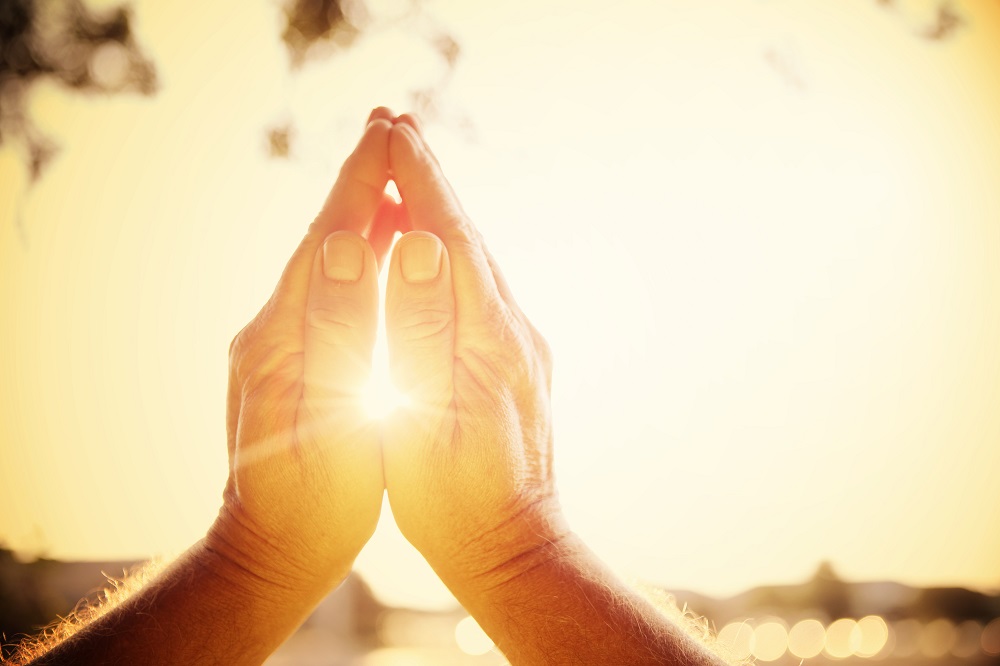 Have you noticed who’s looking at you at all Geneva bus stops and tram stops?  Who’s still wearing white, even way beyond Labor Day?  Who’s the cute guy that everybody’s talking about since a few weeks now?  The Young Pope.  Do you recognize this poster now? 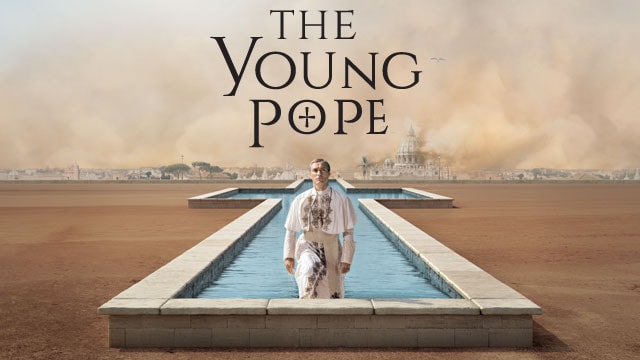 NO SPOILERS INSIDE – READ WITHOUT RISK

The Young Pope.  The Young Pope got into our lives earlier this fall.  Honestly I did not want this to happen.  I am too busy for TV shows, plus I have an addictive personality, plus I get overwhelmed with religion.  But it happened.  And it’s worth it.  The top 13 reasons why you should check him out.  Why you should give The Young Pope a chance.

TOP REASONS FOR FALLING IN LOVE WITH HIS HOLINESS
It all takes place in the Vatican.  The most exciting set after the White House.  Enough with apartments and corporate offices.

The Young Pope is Jude Law.  This is a reason of each one to watch it, right?  Now, add a shower scene, some sport outfits and I know you’re entirely sold.

The Young Pope (shall I call him Lenny for shorter?), closes his eyes and remains in silence.  For minutes.  During a discussion.  I’ve been doing this for years in meetings and finally I am understood.  I am meditating, people, not sleeping nor daydreaming.  I do like the Young Pope.

He smokes.  I am not advocating such a lethal controversial habit.  But admit it.  A pope smoking looks pretty cool.  Plus, Sister Mary smokes too, which makes their evening chats quite funky to look at. 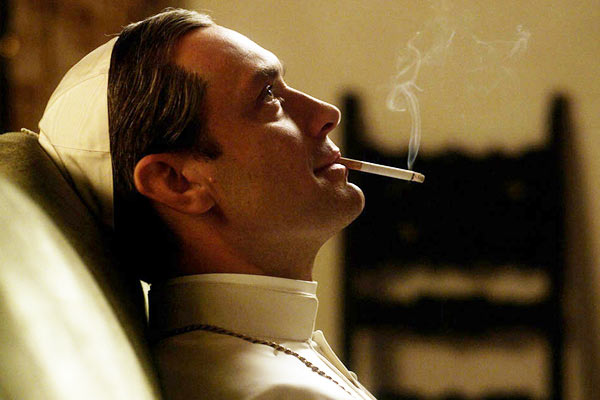 Lenny, The Young Pope, His Holiness (I can go on and on), as a person, he is…  Tough to describe.  4 episodes and 250 minutes later, I am not sure, if he is smart, slow, cool, conservative, kind, ruthless, divine, twisted, human or a saint.  All these 250 minutes have not confirmed any of the above, while they have seeded doubts and evidence for each one of them.  Which makes me wanna watch another 250 minutes.  ASAP! 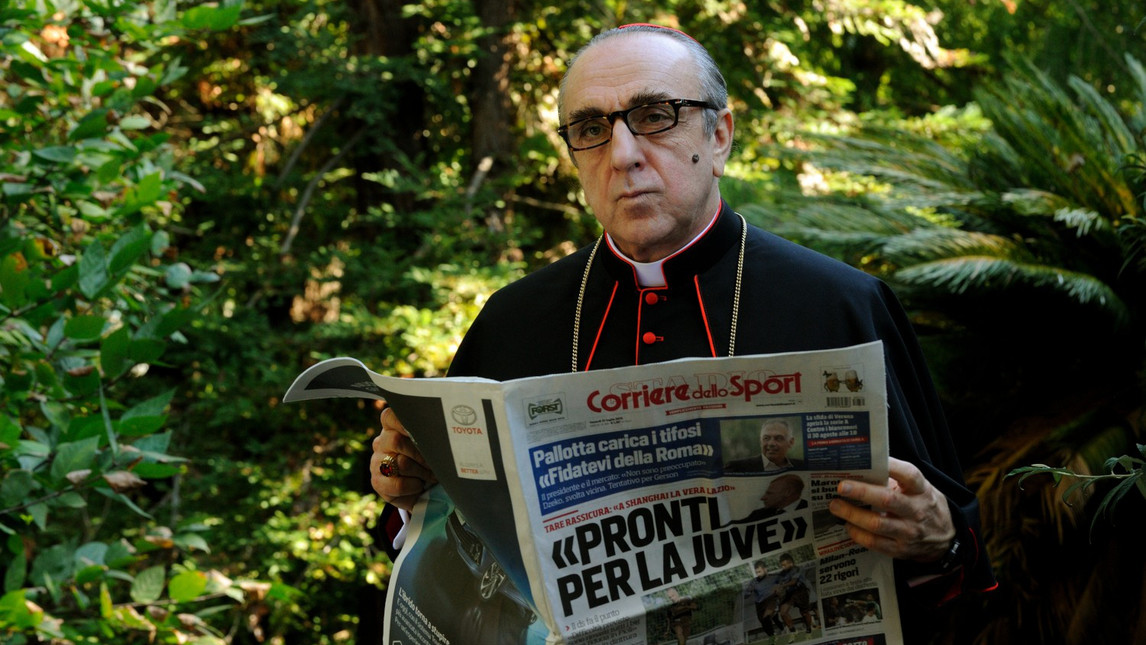 As a show, it is inspiring.  Meaning you get ideas to reapply to real life.  Take the button under the desk for instance.  How amazing would it be if the minute you are bored with a colleague or a friend, you discreetly (or not) push a button and the perfect excuse (or not) could suddenly come up to save you from this boring interaction.  This is good ideas, people! 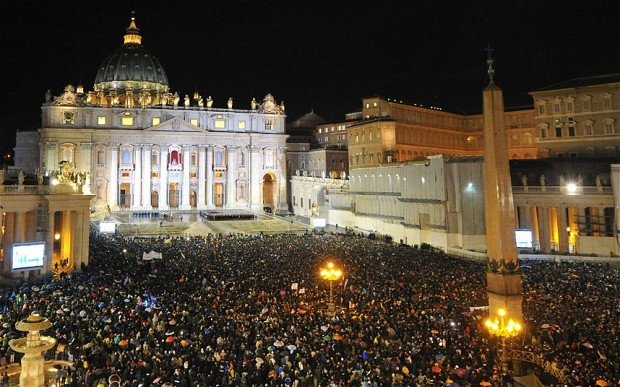 As I was coming up with the 10th reason why to watch the Young Pope, I got distracted by a question.  A question I posed to myself, doing faces to the white mirror in front of me as I was writing about it.  What’s up with these tiny beds?  You made it all the way to be the POPE and instead of the heavenly bed of Westin or Four Seasons, you get that narrow little bed?  Either he sleeps like a angel either he has a guardian angel or he prays to an angel all night, if he manages not to fall off this 60×180.

They have no boring days in the Vatican.  The rumors, the politics, the scandals, make any Brazilian telenovela seem uneventful compared to what comes the mouth of these cardinals and what happens behind those heavy deep red velour curtains.  I like that.  #noshame 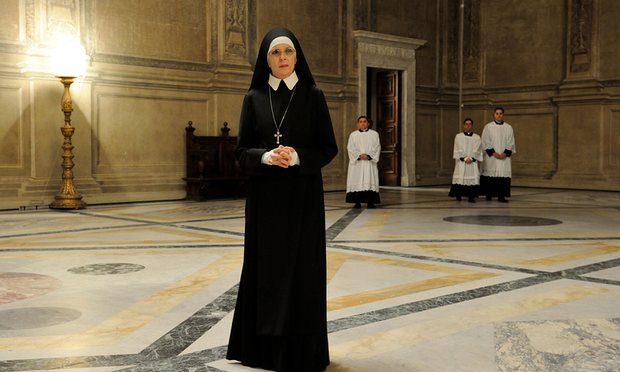 Did I mention the Swiss Guards?  No?  For a reason.  As of episode 4.  Worth noting…

Intrigued?  Let me know what you think….
.